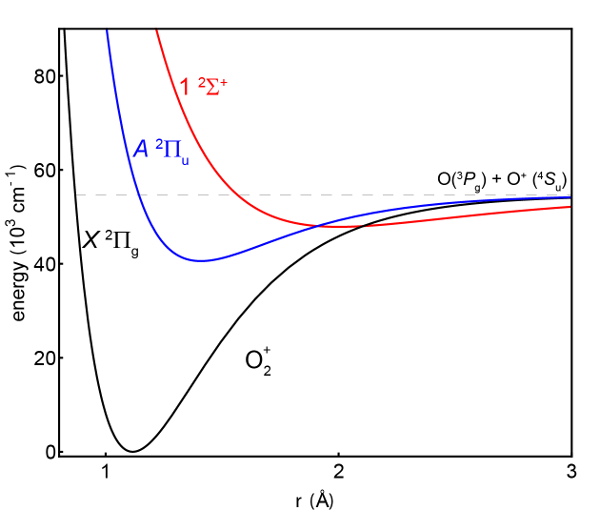 Control of molecular quantum states is complicated by the typical molecule's lack of suitable means for cooling or for preparing or detecting its quantum states. We take two approaches. One is to create molecular ions in a particular quantum state by resonance-enhanced multiphoton ionization (REMPI). We also co-trap diatomic molecular ions with atomic ions. The atomic ions are chosen such that we can use them for dissipative tasks, such as translational cooling. Eventually, an atomic ion will be used for initial-state creation as well as molecular-state detection.

As an example of the sort of measurement enabled by these techniques, we are investigating the use of nonpolar diatomic molecular ions in searches for time-variation of the proton-to-electron mass ratio. A variation of this parameter would indicate new physics and is predicted by some theories of quantum gravity such as string theory. Molecules are excellent candidates for such a search because their vibrational motion is directly sensitive to the mass-ratio variation. In a molecular vibration, the nuclei themselves are moving and stretching the chemical bond. Nonpolar molecules (for example homonuclear diatomic molecules) should be less sensitive to many systematic effects. Our current molecule of interest is , and we have published two papers describing its features in detail (PRA paper, Atoms paper). We aim to use two-photon vibrational transitions as optical molecular clocks, which we discussed in the Atoms paper and also in a review in Quantum Science and Technology. 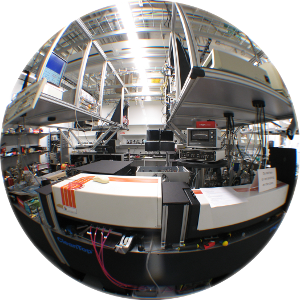 Our lab at Amherst College.

We have two experiments in the lab. The first is built around a radiofrequency ion trap, while the other uses a pulsed molecular beam. The trap is housed in an ultrahigh vacuum chamber, which has access for lasers, imaging, and electrical connections. We load our ions by resonance-enhanced multiphoton ionization. We can also ionize through collisions with a beam of electrons.

Our beam machine uses supersonic expansion to cool the gas. We then photoionize the molecules and conduct spectroscopy on the resulting ions. Flying the ions to a charged particle detector gives us information about the transitions we have driven.

Quantum control of the Be+ ions uses a laser at 313 nm. We made this laser by generating the third-harmonic of an amplified 939 nm diode laser. Our implementation is described in an article in Optics Express (pdf) (OE link). We use acousto-optic modulators for fine control of the laser frequency and of the duration of laser pulses. We produce the molecular ions and drive two-photon transitions with nanosecond-long laser pulses from a dye laser. 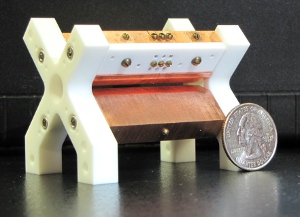 Undergraduate students are important participants in this research. Our ion trap and beam machine were each designed and assembled by students. Students work with the College's machinist to fabricate custom parts on our CNC machines. Many students contributed to our laser and vacuum systems. Summer projects that last 8-10 weeks include things such as optics and electronics for measuring laser wavelengths. You can read about the students' year-long honors projects in the theses section of our publications page.

Many other students have helped with smaller projects such as building photodetectors, setting up a data-logger for ambient lab conditions, and building a radiofrequency signal-conditioning box. Students have even built a demonstration trap that uses 6 kV at 60 Hz to trap dust particles with the same technique we use for atomic and molecular ions.

National Institute of Standards and Technology

As a postdoc with David Wineland in the Ion Storage Group at NIST, I contributed to combining for the first time all the fundamental elements required for scalable quantum computing using qubits stored in internal states of trapped atomic ions. In addition, we demonstrated the first programmable two-qubit quantum processor. At NIST, we used 9Be+ to store and manipulate quantum information. We co-trapped 24Mg+ ions, which we laser-cooled to sympathetically cool the 9Be+ ions without disturbing the qubit state. This dual-species approach is a key tool informing our work at Amherst. The other techniques used, such as ground-state-cooling of the ions' motion and laser-based quantum gates, also heavily influence our work.

As a graduate student with Gerald Gabrielse at Harvard (he's since moved to Northwestern), I contributed to two new measurements of the electron magnetic moment (the "g-value"). These measurements probe the electron's interaction with the fluctuating vacuum. With a quantum electrodynamics calculation, they provide the most accurate determination of the fine structure constant. Given an independent determination of the fine structure constant, such measurements set limits on electron substructure and other extensions to the Standard Model of particle physics. Our second measurement, which formed the basis of my Ph.D. thesis, measured the moment at a relative uncertainty of 0.28 parts-per-trillion. It yielded a value of the fine structure constant with a relative accuracy of 0.37 parts-per-billion, over an order of magnitude smaller uncertainty than the next-best methods at the time. Our techniques included trapping a single electron with static electromagnetic fields, cooling it to the quantum ground-state of its fastest motion, and resolving single quantum jumps of this motion and single spin-flips.